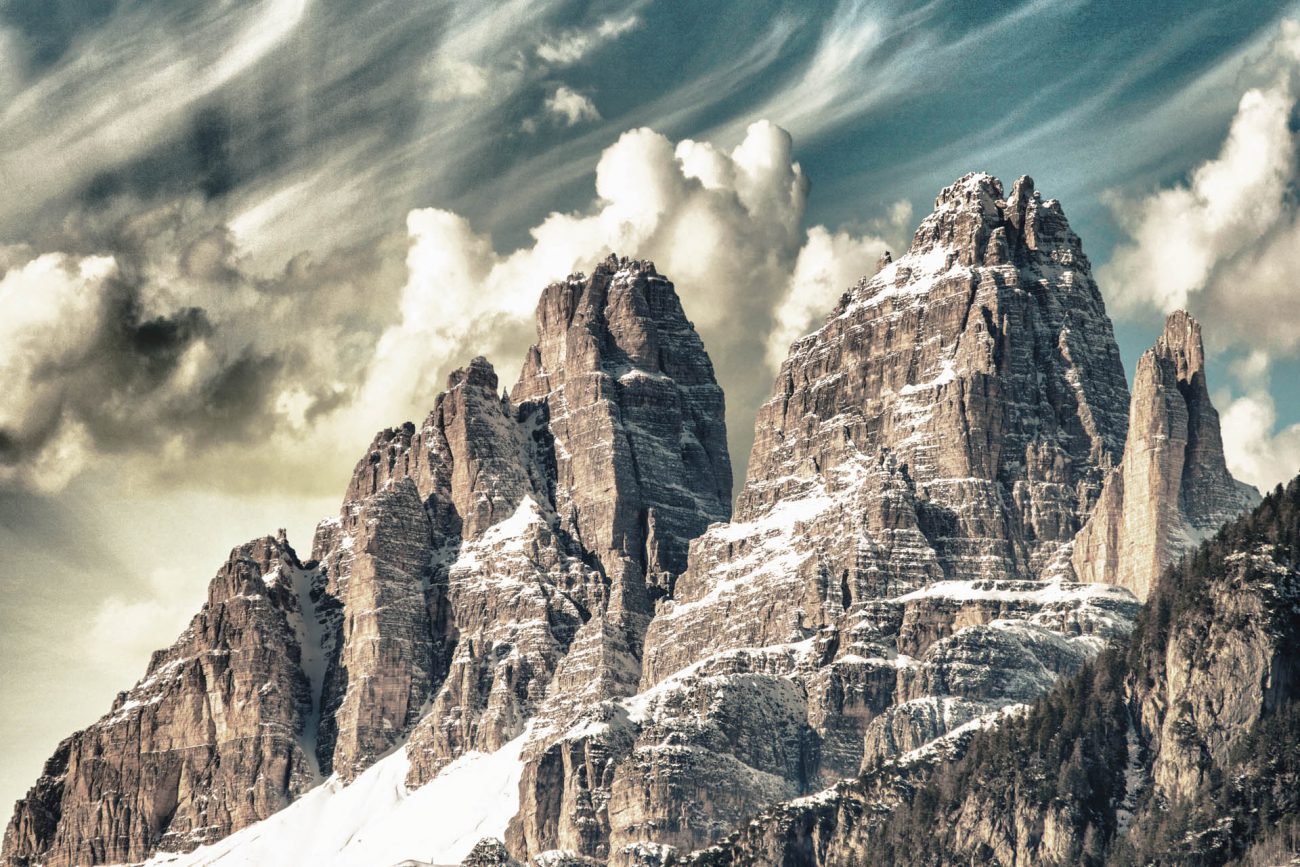 “Come, have a close look at this wonder, without a doubt one of the most beautiful, powerful and astonishing gifts from our planet… Are they rocks or clouds? Are they true or maybe a dream?”
Dino Buzzati, “Le montagne di vetro” [The Glass Mountains]

“The nine components of The Dolomites World Heritage Site protect a series of highly distinctive mountain landscapes that are of exceptional natural beauty. Their dramatic vertical and pale coloured peaks in a variety of distinctive sculptural forms is extraordinary in a global context. This property also contains an internationally important combination of earth science values.

The quantity and concentration of highly varied limestone formations is extraordinary in a global context, whilst the superbly exposed geology provides an insight into the recovery of marine life in the Triassic period, after the greatest extinction event recorded in the history of life on Earth. The sublime, monumental and colourful landscapes of the Dolomites have also long attracted hosts of travellers and a history of scientific and artistic interpretations of its values.”

(UNESCO, World Heritage Committee – Seville, 26 June 2009)
A Foundation to manage a unique Heritage Site
With the agreement of UNESCO, the Foundation Dolomites UNESCO was set up in 2010. Its mission is to ensure the efficient management of this serial property, promoting its sustainable development and encouraging the various local authorities, all with their different administrative frameworks, to work in partnership.
www.dolomitiunesco.info

An exceptional beauty
The Dolomites have always had an enormous impact on the imagination of all those who have seen them. The imposing nature of these stone giants has inspired the people inhabiting them from prehistoric times, to the extent that they have become an essential part of their cultural identity.
Then, after they were “discovered” by science, romantic travellers recognised them as the embodiment of those ideals that landscape painters had hitherto only imagined.
No one has remained immune to their extraordinary fascination, to the extent so that they are universally considered “the most beautiful mountains on Earth”.

A journey through space and time
The special link with geology and the significance of this aspect is highlighted by the very name of these mountains, deriving from the dolomite mineral which was discovered here by the French scientist Déodat de Dolomieu (1750- 1801). From the dawn of geological research, the Dolomites have represented a point of reference at global level thanks to the extraordinary accessibility of these mountains and the clarity with which the geological phenomena can be observed. Some of the founding principles of Earth Science were deduced here. Even today, scientists and researchers from all over the world come to the Dolomites to compare notes and study the history of the Earth more closely “in the field”, confirming the continuing interest in these extraordinary mountains. In particular, the period between the Upper Permian and the Triassic (between about 270 and 200 million years ago) can be seen here in spectacular detail.

#Dolomites2040: what plans are there for the future?
Between May and June 2015 the Foundation Dolomites UNESCO has launched a local participation project providing input for drawing up the Overall Management Strategy for the World Heritage Site, a document due to be submitted to UNESCO in 2016.

Explore the UNESCO Dolomites on Google Street View!
Today it is possible to enjoy the Dolomites online thanks to an agreement that the Foundation Dolomites UNESCO signed with Google.
Whether you’re in New York, Calcutta or anywhere else all you need to do is to link to Google Street View, and place the little man icon on the footpaths shown in blue to relive a trip you have made, get a foretaste of your holiday or just fall head-over-heels in love with the Dolomites.
www.google.com/maps/views/streetview/dolomiti-unesco?gl=us