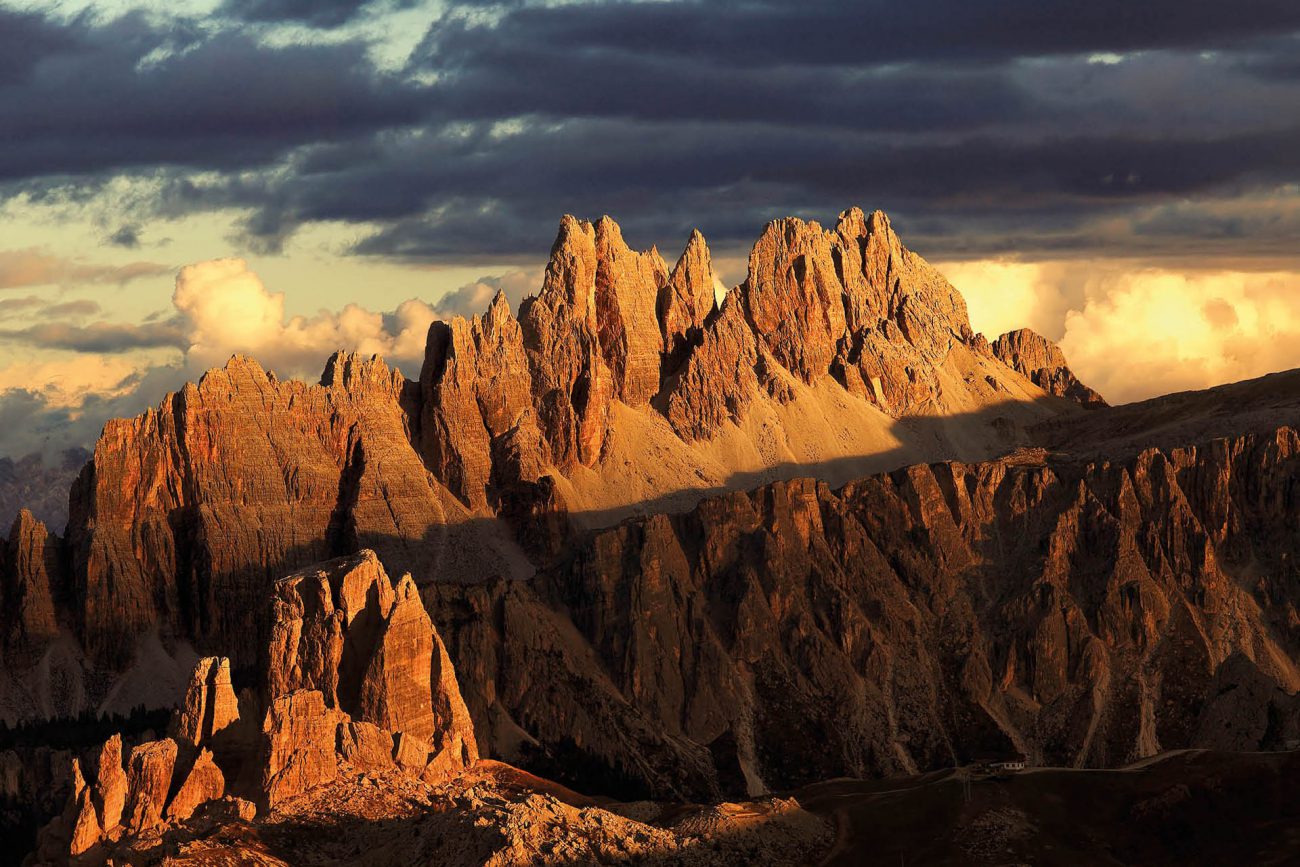 All the senses of the summer in the territory of Belluno

The summer in the territory of Belluno includes all senses: from the view of the Dolomites to the taste of mountain products. Through the mythical eight Alte Vie delle Dolomiti (High Paths of the Dolomites), you get to the Three Peak of Lavaredo, Marmolada, Tofane, Antelao, Pelmo, Civetta, Cinque Torri (Five Towers), Schiara, until Col Nudo and the Vette Feltrine (Peaks in the territory of Feltre). Through traverses and the ancient paths for pilgrimage, you see the fascination of the piedmont churches of Tesori d’arte (Art’s treasures), in the 30 stages of the Cammino delle Dolomiti (Dolomites’ Way). There are many museums and collections (around seventy), through which the history of a rich and heterogeneous territory is told. And something more: riding, mountain biking, windsurfing (lovers of this sport from all Europe go to the Santa Croce lake), trekking in parks (Naure Park of the Dolomites in the territory of Belluno and Regional Nature Park of the Dolomites in Ampezzo), in the protected areas such as Altopiano del Cansiglio, the wild Montina Valley, Visdende Valley “the valley you should visit” or Sests Valley, the starting point of the river Piave.

The over 100 refugees in the province of Belluno are reachable by chair lift or by cable car, and there you can relax and sunbath.  You cannot miss the trekking through the several passes: Falzarego, Giau, Pordoi, Staulanza, Duran, Tre Croci, where the famous bicycle race Giro d’Italia often stops.

Among the several excursions, we want to mention the Sentieri Parlanti: precious paths of the World Heritage Site of the UNESCO, which you can discover thanks to the free App for smartphones (https://itunes.apple.com/it/app/sentieri-parlanti/id879020408?mt=8). There are three different paths: the “Anello del Vescová” in the National Park in the province of Belluno, the “Giro del Pelmo” in the Zoldo Valley and the “Anello del Popera” in Comelico.

There are also options for people who do not want to make hard hikes: for example, the “giro delle frazioni” (suburbs’’ tour) in Selva di Cadore and Colle Santa Lucia or the trekking in Zoldo Valley, which belongs to the Bergsteigerdörfer (mountaineers’ villages), together with Cibiana and Zoppé di Cadore.

Other wonderful hikes in the nature are in the Biois Valley, such as the route in the uncontaminated Focobon Valley and the one in the Valfredda, immersed in green pastures and the mountain huts used for haymaking. In Canale d’Agordo a nice 2-km long way starts from the main square, along the “Way of the Cross of Pope John Paul I”.

The new path Dolomieu Trail, from the refugee Faloria to Rio Gere, close to the Pass Tre Croci (Three Crosses), is dedicated to the French geologist Déodat de Dolomieu, who defined the rock composition of the Dolomites in the 18th century. From this path, you have a wonderful view of the valley. The way Astro Ring will fascinate adults and children who are going to discover the mysteries of the universe. It is composed of two paths, and the starting point is the observatory in Col Druscié: the Sentiero dei Pianeti (Planets’ Way) and the Sentiero dell’Universo (Universe’s Way) (www.cortinastelle.it).

The Dolomites (70% are in the province of Belluno) offer several itineraries and routes with fixed ropes. Among them, we mention the trekking between the mountains Civetta and Pelmo for lovers of high altitudes (www.valdizoldo.net). After few kilometres, you are in Longarone, where there is the memory route, on the right side of the Vajont Valley.

If you want to understand the magic of the earth, you have to explore the Dolomites of the territory of Belluno. Through a Geo Hiking Way in Arabba (www.arabba.it), you discover the tropical soul of the Dolomites and recognise in their rocks the features of an incredible fossil coral atoll.

The province of Belluno is becoming the most favourite destination for biking lovers: there are bike resorts with 700 km long bikeways and dedicated services in Cortina D’Ampezzo (http://www.cortinadolomiti.eu/) and Comelico Valley. There is a new bike path as well, close to the Three Peaks of Lavaredo, through the Somadida Forest (http://auronzomisurina.it/).

In the triangle Arabba-Selva di Cadore and Colle Santa Lucia, there are several paths, differently difficult and long, for the lovers of mountain biking. These are the starting points for the lovers of street bikes and racing bicycles towards the passes Duran, Staulanza, Falzarego, Giau, Pordoi, Campolongo and Fedaia.

The longest ways are along the Lunga Via delle Dolomiti (Long Way of the Dolomites), from Cortina d’Ampezzo or the Ciclovia dell’Amicizia (friendship bikeway) Munich-Venice http://www.muenchen-venezia.info/ , until Venice.

Having fun and learning with vitality

There are several initiatives for families, such as the Green Week in Zoldo Valley, with many activities: preparing (and eventually eating) a real cheese produced in a hut and safely climbing with a guide.

In order to live adrenaline-charged moments, we mention following activities: funbob (Auronzo di Cadore), zip-line in Santomaso Agordino, a cableway situated 160 m above the soil from which you can jumpu at 80 km/h for two kilometres, the adrenaline and adventure parks (Cortina d’ampezzo, Three Peaks, Alleghe and Nevegal), parks with typical fauna (in Sappada) or relaxing didactic paths such as “I Suoni del Bosco” (The Sounds of the Wood) in Ceralte di Perarolo di Cadore.

Becoming falconer for one day, with several experiences in Cortina d’Ampezzo (village of Vervei) and in the Castle of Zumelle is a unique experience.

During the summer 2016, there is going to be the train at the bottom of the Marmolada, along the Serrai di Sottoguda: adults and children are going to enjoy it!

Wellness at a high altitude

In the valley there are several accommodation facilities, but we also recommend to try wellness at high altitude, with hot saunas and baths on the peaks of the Dolomites, for example in the refugees Scoiattoli, Croda da Lago and Lagazuoi.

The magic of the Starlight Room Dolomites, from sunrise to sunset, is an unforgettable experience: admiring the sky in the first row, in a comfortable room in Col Gallina (Pass Falzarego) to “taste”, alone or with other people, the magic of the sky, far away from light pollution and from the noise. (www.lagazuoi5torri.dolomiti.org).

In order to experience the culture of the Dolomites, we mention some initiatives: the 23rd edition of the Rassegna Organi Storici in Cadore (Exposition about the history of Cadore, http://www.organincadore.it/), the Festival de Ra Bandes in Cortina d’ Ampezzo (http://www.corpomusicalecortina.it/).

There are many historical commemorations as well: the Palio of the city of Feltre (http://www.paliodifeltre.it/), the exhibition about arts and professions in Cadore Valley during the 19th century, and between July and August many events in the Castle of Zumelle (http://www.castellodizumelle.it/).

On the 16th and on the 17th of July, ice cream is going to be celebrated in Dont di Zoldo; through its inhabitants, ice cream has become famous all over the world. The international prise Pelmo d’oro celebrates personalities of the Alpine world, in Comelico on the 30th of July.

At the end of the summer, animals come back from the huts and from the pastures. This is going to be celebrated as well, for example in Selva di Cadore on the 10th and 11th of September and in Falcade during three days at the end of September.

Sport events that need to be mentioned: Walkdolomitica, in Comelico Valley, on the 27th and 28th of August (ww.walkdolomitica.it), and the Eco-Marathon. For bike lovers, 3Epic organizes events during the whole year (www.3epic.it) at the bottom of the Three Peaks of Lavaredo.

Eventually, in July, by the 5 Torri (5 towers), the exercise of the Alpine Troop is exciting: 300 members of the Alpine troops are going to proof their abilities under extreme conditions in the places where the Great War has been fought.